Lightened-Up Penne a la Vodka is the comfort food you crave, remade without the guilt (butter & heavy cream) - but doesn't disappoint on being creamy, cheesy, silky, and full of flavor. 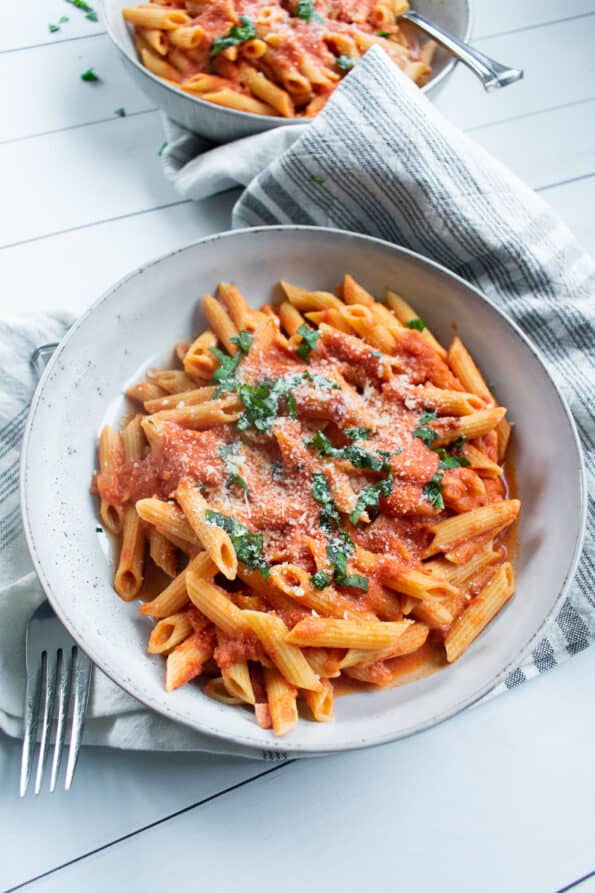 Penne a la vodka is a classic Italian pasta dish that's made with tomato sauce, heavy cream, vodka, shallots, garlic, and butter. Although it may seem like a difficult sauce to make, vodka sauce is actually super easy and it uses minimal ingredients.

There's also that signature taste that doesn't taste quite like anything else!

It's creamy and decadent with hints of tomato, cream, and cheese. Contrary to what you would think, you do not taste any of the vodka in the sauce either. The vodka fully cooks out.

But it is there to help deepen the flavor of the tomato sauce (among other things), which only alcohol can do. What it leaves behind is divine. 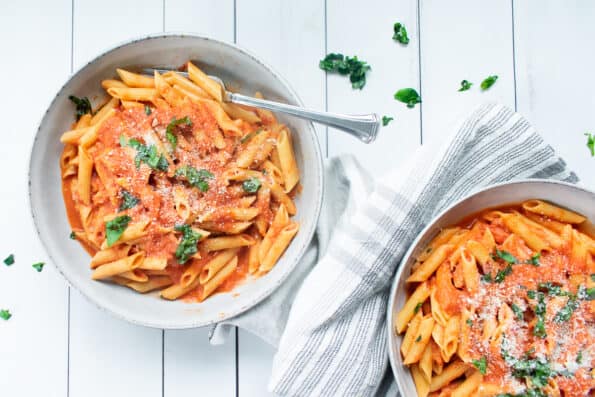 If you’ve ever made vodka sauce before, it's no mystery as to what makes it so amazing. The sauce calls for about 2 sticks of butter & something like 2-3 cups of heavy cream, like most good things in life.

Which is why it is literally my favorite pasta sauce. Forget the vodka, it’s made up of about 80% fat.

Fat can be a good thing (egg yolks), but it can also be very heavy (baby back ribs). In moderation, this is all good. In fact, I will eventually post my family’s traditional Penne a la Vodka sauce for your cheat meals/days/bulking/treats/entertaining. It’s a no-fail recipe that any beginner could make and always looks impressive. 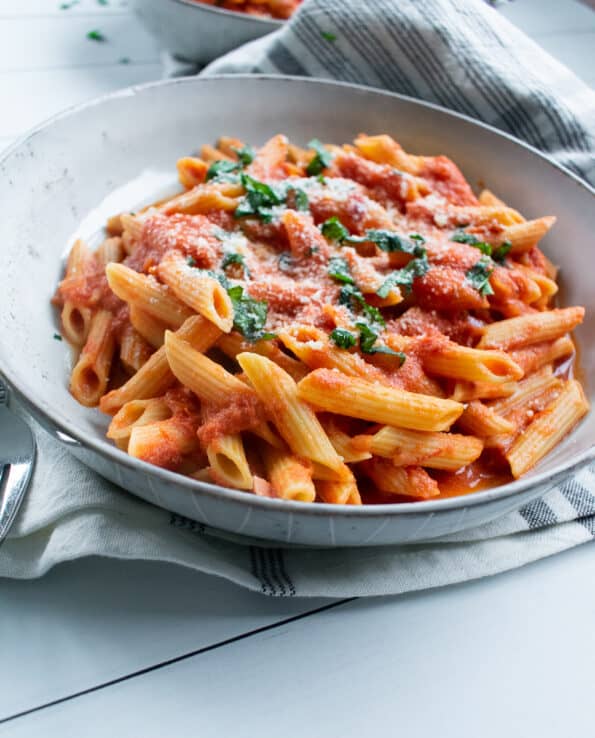 FAT AS A MACRONUTRIENT

Let’s backtrack for a second. I do not want you to get the impression that I’m shaming eating fat or even coming close to saying that “fat makes you fat”. This is really far from the truth.

Without getting too in-depth as to what kinds of fats there are, our bodies need this macronutrient. Just like the other two macronutrients (carbs & protein), fats are vital to our body’s daily functions. And just like carbs and protein, some fats are better for you than others.

So, that’s why your 2 tbsp of peanut butter (180 calories) is the same as the 4 ounces of chicken breast you eat for lunch (180 calories), even though the portion is very different.

You intuitively know this too: whole milk nutrition vs skim milk, 80% ground beef vs 92%, etc. Fat does not make you fat, the extra calories do. So when you’re losing weight, it’s a great place to cut unnecessary calories from. 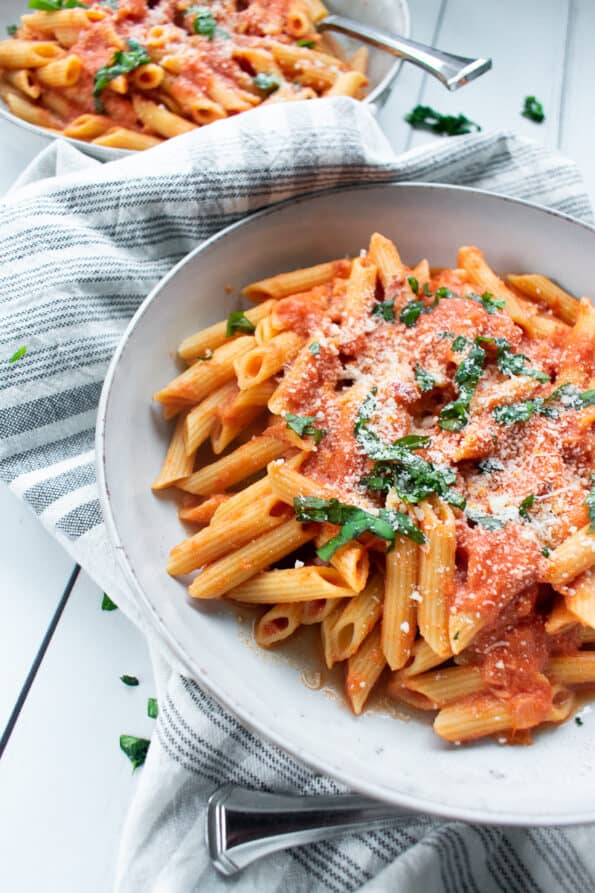 Now that you understand what makes this dish so heavy & why – you also understand what needs to be replaced in this recipe. However, what I did not want to happen was to cut out all the good stuff and be left with something that tastes “kinda, sorta” like Penne a la Vodka. What this Lightened-Up Penne a la Vodka DOES make is a happy medium, that you may not even be able to taste.

Here are the changes to make it lighter:

ALCOHOL AS A MACRONUTRIENT

What's vodka sauce without vodka you say? Well, besides being there to deepen the tomato flavor, is kind of a useless waste of calories in a lightened-up version.

As a macronutrient though, vodka isn’t a fat, a carb, or a protein. Which means, it isn't anything.

Also, assuming you’re making this version for any health-related goals, alcohol just doesn’t fit into this one. While we’re on the topic, when we ingest alcohol, our bodies cannot do anything with it. It provides us with nothing. It's technically its own macronutrient that our bodies can’t store as fat.

What this means though, is that since our bodies cannot store it, it switches to burn the energy (calories) in alcohol and postpones fat burning (even in a deficit). So, in short, alcohol consumption inhibits fat oxidation. I linked an article below if you’d like to learn more about this!

But I digress. Without much of the fat and the vodka, this Lightened Up Penne a la Vodka is still creamy, silky, and familiarly delicious. The whole dish comes together much quicker too! Making it perfect for a weeknight indulgence – or maybe it will just feel that way! Making a big batch of the sauce to portion out throughout the week is also a fantastic idea! 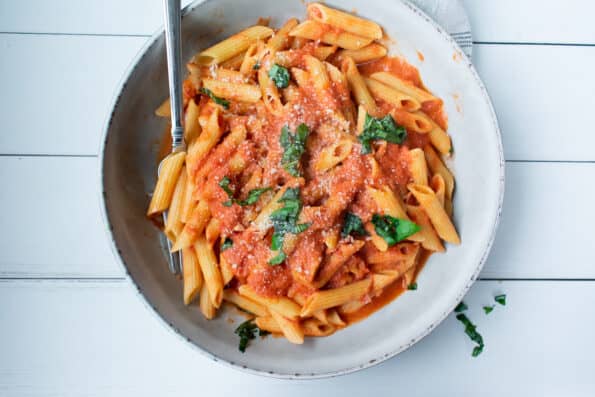 Here is a quick overview of what you'll need to make this lightened-up penne a la vodka and the steps simplified.

Step 2: Add in the sauce and the ham and cook the sauce

Step 4: Finish off the sauce & mix with your pasta

How many calories are in penne a la vodka?

In a full-fat version of penne a la vodka there could be up to 865 calories in a 4-ounce serving. In this lightened-up version, there are only 338 calories per 4 ounce serving!

Even though the classic vodka sauce is made with a lot of fat, it is still fairly healthy. It's loaded with tomatoes, shallots, and ham, which adds vitamins, servings of vegetables, and protein. Since the alcohol cooks out, that is not a factor in the nutrition. This version for lighter vodka sauce is even healthier though because it eliminates much of the fat that gets incorporated through the heavy cream & butter.

How can I store vodka sauce? 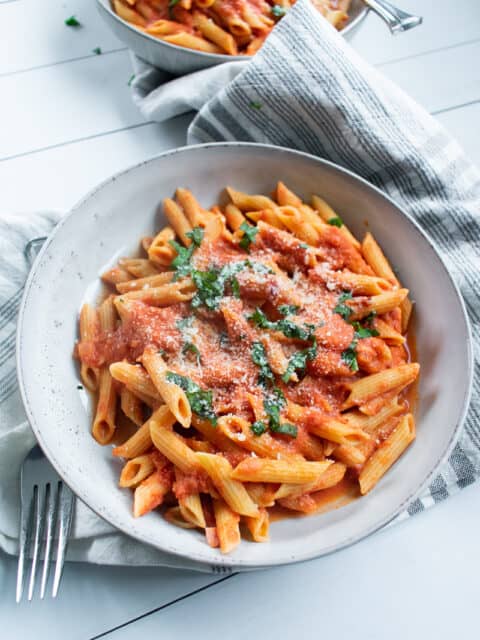 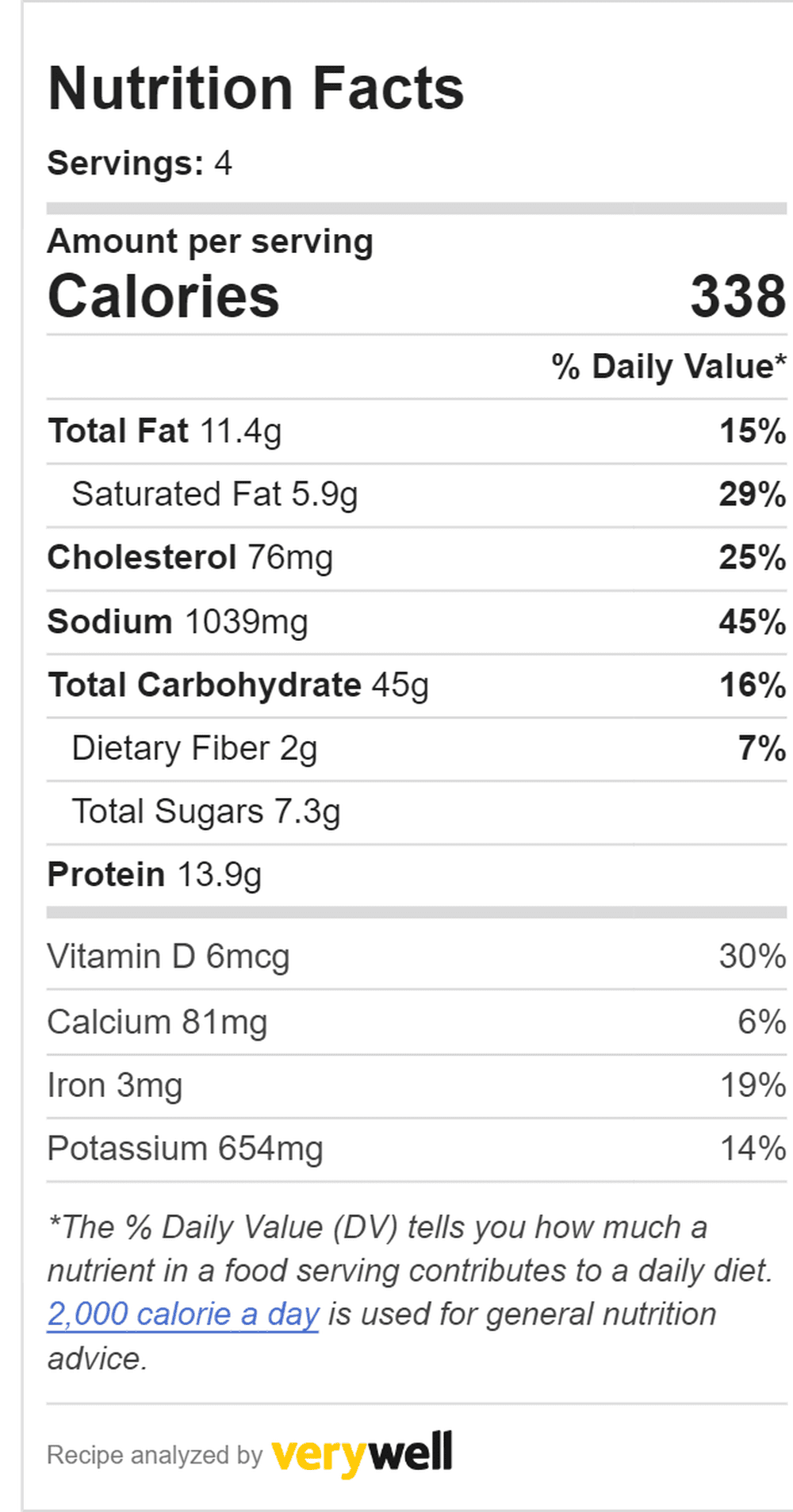