Cream Cheese Frosted Cinnamon Rolls are big fluffy rolls filled with cinnamon sugar & pecan goodness, oozing with frosting and soft all the way through, made to make any holiday morning or weekend brunch extremely special. 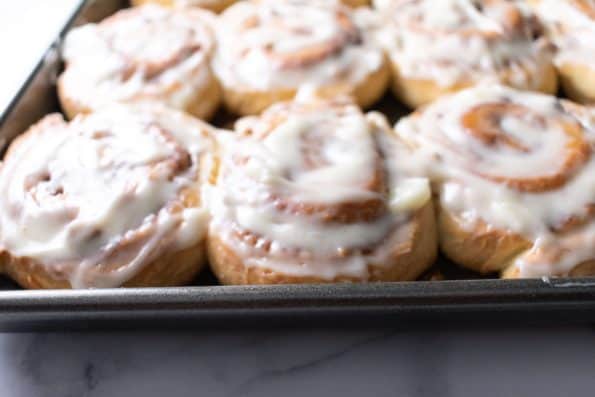 I’ve been embracing a lot of new change lately. I started a new job two weeks ago which has been going great – but change is a lot to handle sometimes even if its good change. Another change is that this Christmas is our first as a married couple, which is a really happy change! We’re spending it with my family on Long Island this year, a new thing for my husband.

One tradition we both have is enjoying homemade cinnamon rolls while opening presents. I promised to absolutely have these for him to ease into the change of spending Christmas away from his family. Its really sweet that we have such a small detail of our family's Christmas morning that’s totally the same! 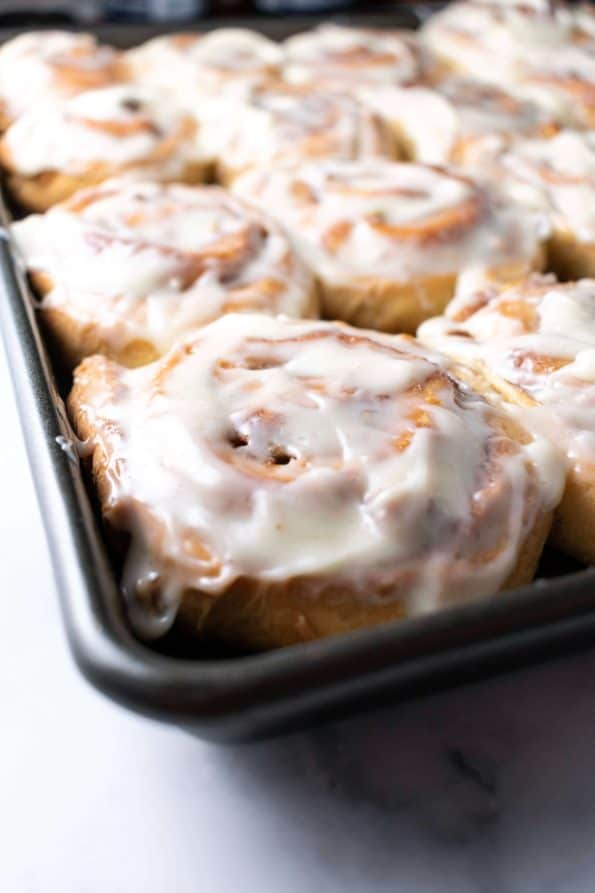 I usually follow a pretty simple recipe for cinnamon rolls and modify to my own liking, so it was time to really put my recipe in writing. I’ve been making these same cinnamon rolls for years now and they are always a hit. I mean, who doesn’t love the excuse to essentially eat dessert for breakfast? I used to love waking up to the smell of my mom making the Pillsbury cinnamon rolls!

This recipe is always a no fail for me. It’s straightforward & comes out fantastic every time. Warning: I like my cinnamon rolls sticky, loaded with cinnamon sugar, and to not feel like I’m just eating a bread roll. I want the whole roll to taste like the MIDDLE of the roll. So if you don’t agree with that, these may not be for you! 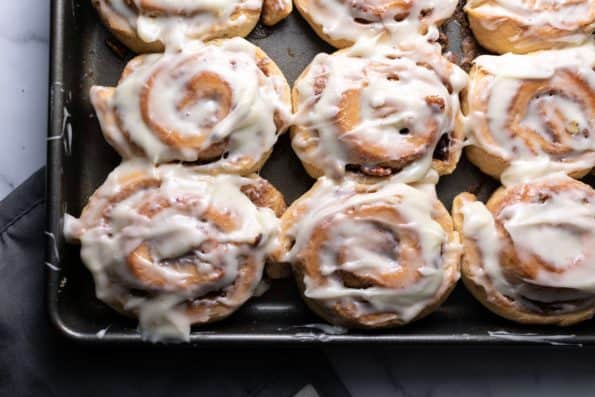 And can we just talk for a minute about Cinnabon? It takes all my willpower to not get one in the mall or at a rest stop along the parkway. They taste amazing – but for 1,000 calories? (Yes, that’s really straight from their nutritional info!) That’s like two meals, not a snack…unless I really want to cheat on my diet!

And even then, do they really need to be that high in calories? No, they absolutely don’t. I don’t want to cut corners on cinnamon rolls – I’m either all in or all out, but making them ourselves can cut out over 500 calories and somehow make them that much healthier. Yes, I just used the word healthy when talking about a recipe that calls for butter, sugar, & frosting! {These are 368 calories} 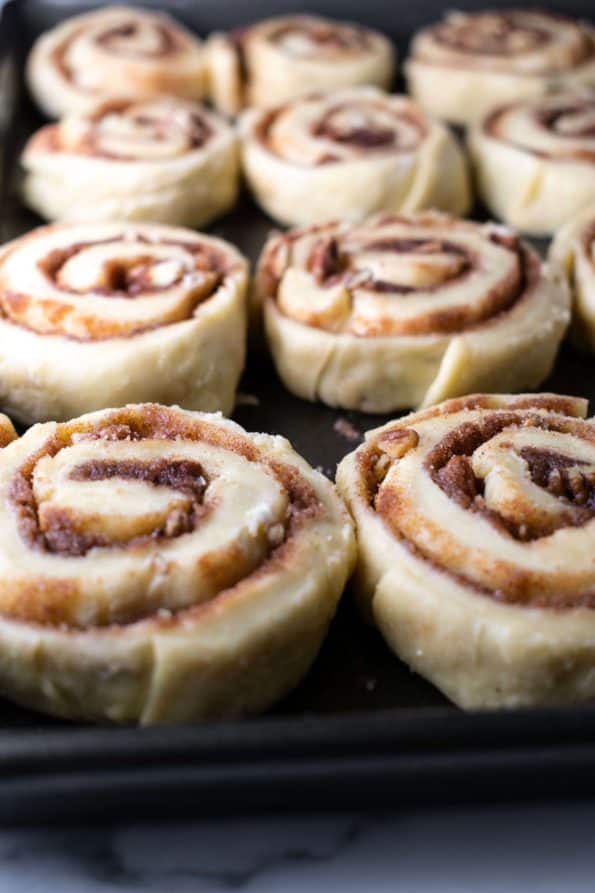 So now, picture waking up on Christmas or any special occasion, or uh, any given day, to the smell of Cinnabon coming out of your kitchen. Yep. Sold. Let’s do it.

Yeast needs to be reactivated to make the dough rise. Some instant yeast can be mixed directly into your dough and others need to sit in warm water for a few minutes. Sugar can also be used to double check that your yeast is alive and will make your dough rise since sugar is what yeast feeds off of in your recipe to expend CO2 and make dough rise.

Adding sugar isn’t totally necessary, BUT I have had a few odd occurrences where my dough didn’t rise and its worth finding this out now, before going any further into the recipe! Adding a teaspoon of sugar to the warm water and yeast will tell you in under 2 minutes if your yeast is alive or not. Active yeast will start to bubble and rise if there’s sugar in your water. If your dough is dense, crumbly, hard, and still not rising after 45 minutes – the problem is your yeast. The dough should be soft, pliable, and continue rising. 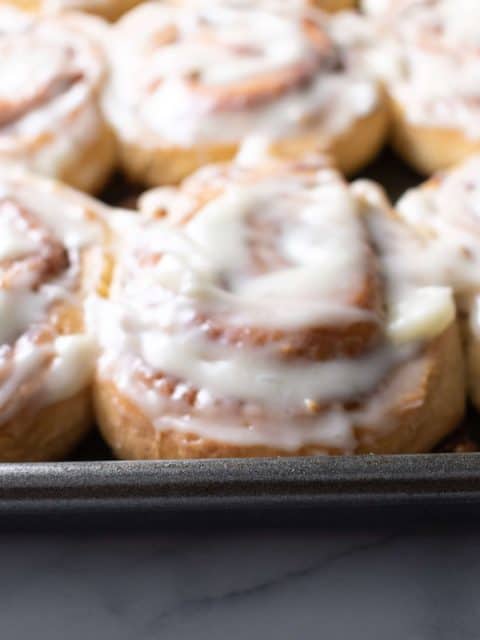 To store leftover rolls in case you don't eat this all in ONE sitting...tightly cover unfrosted rolls in plastic wrap or an air tight container and refrigerate. 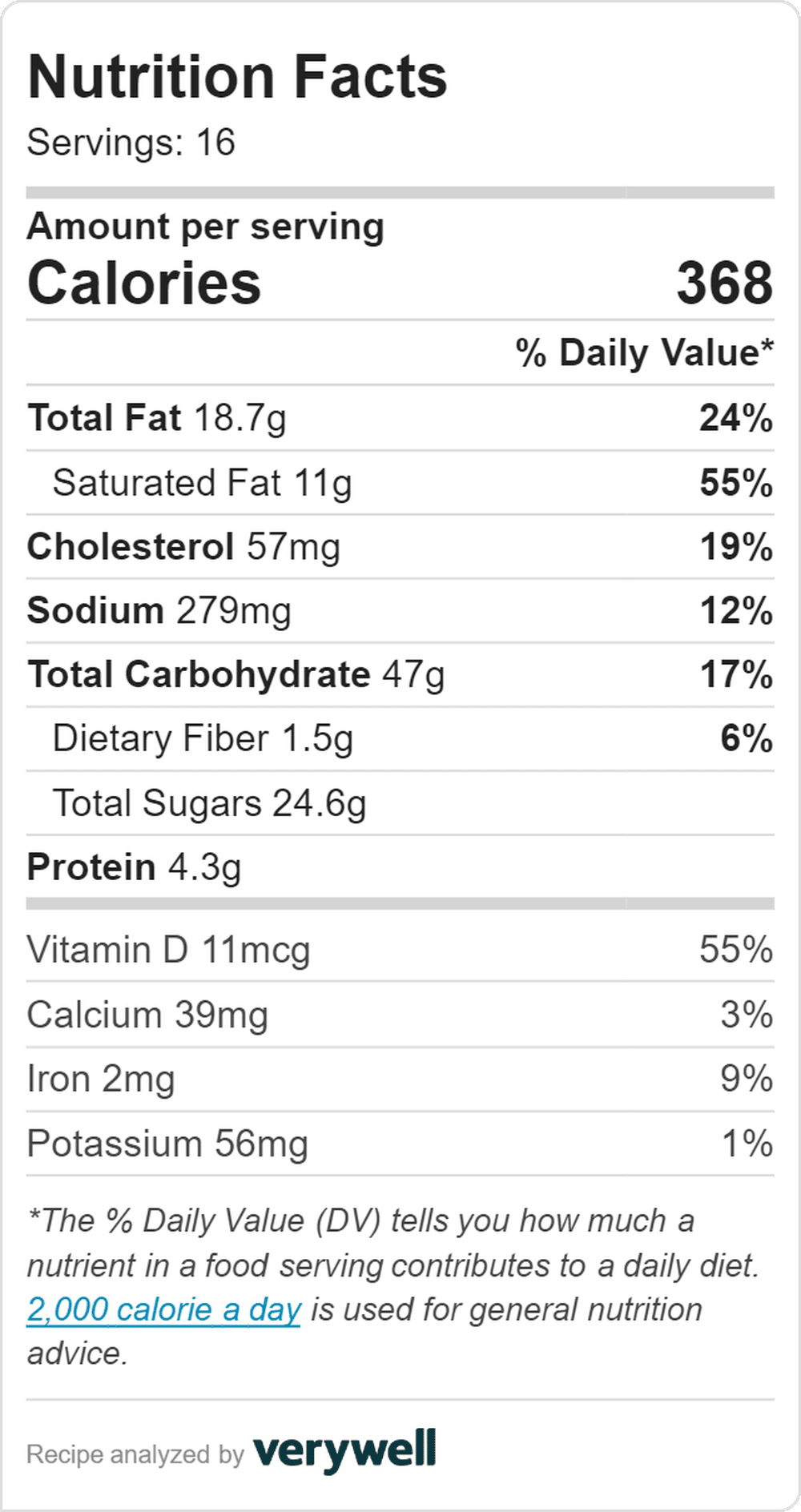