Coconut Flour Protein Pancakes are a delicious low-carb alternative to regular pancakes that are still fluffy and also high in protein.

Giving something up or trying to avoid something almost always results in wanting it that much more. That thing we shouldn’t or can’t have now all of a sudden becomes something we NEED. Rules are funny like that – and so are cravings.

Like that time I gave up chocolate for four months. It was all in an effort to control my migraines. I knew the chocolate, in the amounts I was eating it, was harmful to me, but still I craved it. In the beginning it was extremely difficult. No matter how many little caramel cubes I tried to substitute for a Hershey kiss, I would still find myself cheating. 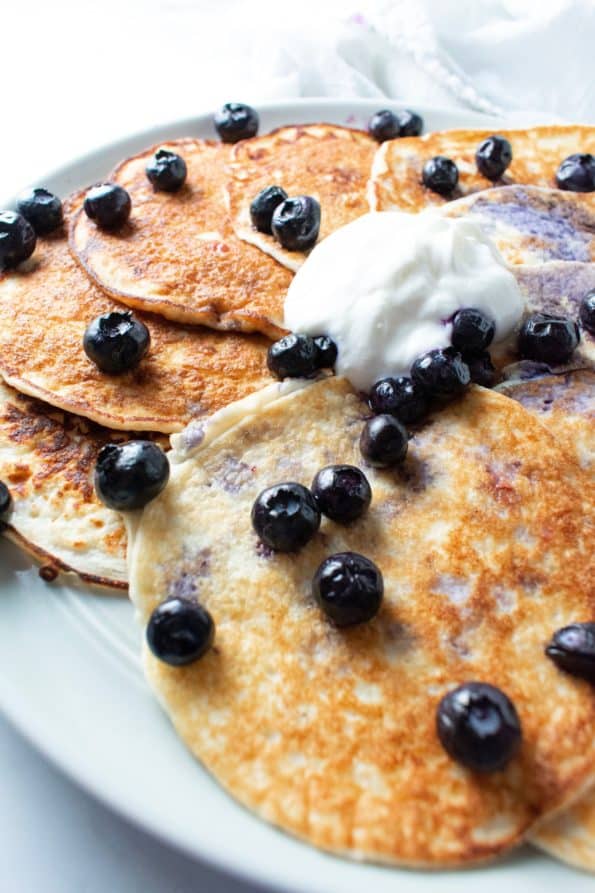 Only when it gets serious (and sometimes not even then) do we find ourselves saying, “okay for real this time. I mean it”. When the migraine induced vertigo hits me from out of nowhere and the room starts tilting that’s usually when I find myself swearing it off.

Maybe it’s not even that serious for us. Maybe we’re just trying to lose some weight and cut back. The chemistry behind a craving (ahem dopamine) is really fascinating to me and I want to dive into that a little deeper down the road.

For now though, I want to switch gears to pancakes. I promise this comes full circle. This challenge/cry for help came to me from my brother whose been doing a keto/low carb diet. While FaceTiming with him he would not stop talking about pancakes.

Obviously, they are not allowed on the keto diet since one medium pancake contains 11 carbs. He had substituted this for protein pancakes which was just some whey protein powder mixed with an egg. Obviously, this was not cutting it. They lacked flavor, we’re not fluffy, were extremely dense and thin, and the batter only made two pancakes. 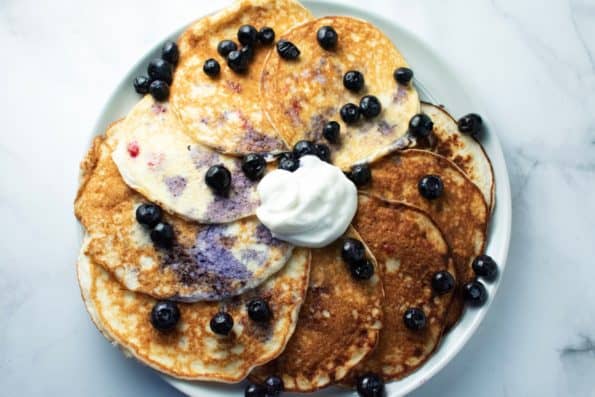 Setting out on this pancake replacement quest, we knew we should try to supplement the batter with some coconut flour. Coconut flour is just ground coconut and let me just tell you it smells like Hawaii in a bag. It does give a slight “coconut” flavor, but if you didn’t know it was used you probably wouldn’t guess it.

It also reacts differently than regular flour in that it absorbs A LOT of moisture, so you only need to use a little bit. Where you would be using say one cup of regular flour, you can get away with using maybe only ¼ cup of coconut flour.

The nutritional facts of coconut flour are quite impressive too; for ¼ cup there’s only 4 net carbs, where compared to regular flour there’s 23 grams.

My first experiment of making these protein pancakes was not a total success. We liked them and ate them, but still they were not like the real deal.

In my first batch, I mixed whey protein powder, coconut flour, 3 eggs, milk, baking powder, and salt. They turned out to be pretty thin and I wished they weren’t quite so dense. Pancakes are supposed to be soft!

Back to the drawing board. Tweaking the recipe here and there for the reasons I was suspecting it was failing, turned into a success! 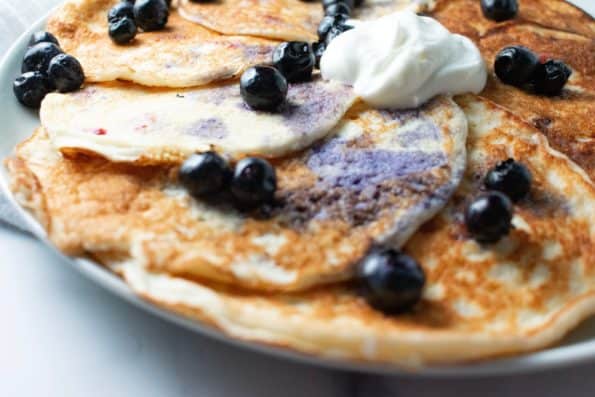 Problem #1: Too Dense. Cooking with whey protein you often have this problem. It does not react to heat and “rise” as regular flour would. Casein protein powder on the other hand, is more milk derived than whey protein and can handle heat, it also has the tendency to be lighter than whey.

Problem #2: Too Dry. I know half the problem was because of how dense it was, but I wanted to be absolutely certain that these new batch of pancakes would be moist. Adding in an additional wet ingredient, like mashed banana, applesauce, or yogurt would do just that. In this case, I used 4 ounces of Greek yogurt.

Problem #3: Too Flat. Since we have no flour in this batter, we also have no gluten. Which aside from knowing it as the “stuff that some people can’t digest” it’s also the stretchy stuff that forms inside of batter/dough that helps it rise. So instead, I’m turning to stiff peaked egg whites to give these little guys some life.

Egg whites are used in various desserts that help give them rise, soufflé anyone? I whipped them for 4 minutes until they were extremely foamy and forming peaks, folded them in gently to my batter, and was maybe too excited when I taste-tested the first baby pancake, screaming “ITS SO FLUFFY!”. 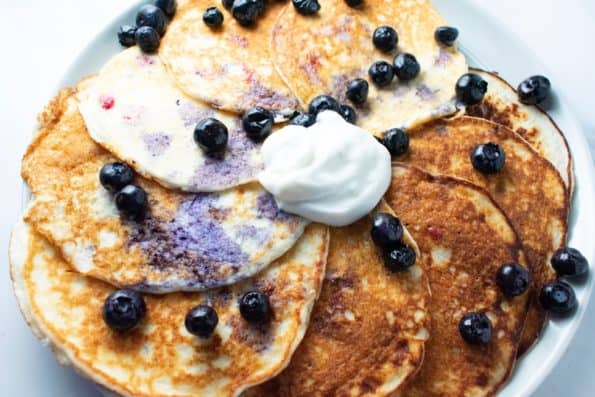 Now – back to coming full circle, these pancakes fully met our expectations for pancakes and we didn’t need to “cheat” on our diets to have them. I had four medium-size pancakes for 255 calories, 40 grams of protein, and only 11 grams of carbs.

Sure is! It's derived from the pulp of the coconut, so you know it's loaded in nutrients. To be exact, it's loaded in manganese, copper, selenium, magnesium, phosphorus, iron, potassium, and even antioxidants.

Since the batter is made of nutrient-rich coconut flour and has added protein powder as well, protein pancakes are healthy because they're loaded with nutrients and protein. This will help with satiety and hunger.

If you use the wrong protein, like whey protein, your pancakes will turn out dry because whey protein doesn't react to heat in the same way that casein protein powder does, which tends to be lighter. Adding additional wet ingredients will help the moisture too.

What's the difference between protein pancakes and regular pancakes?

Protein pancakes use protein powder in the batter which helps to increase the protein content in the pancakes. 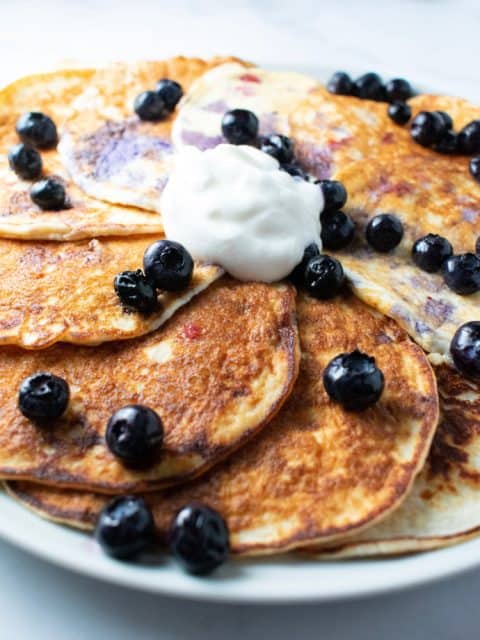 If you make this recipe or any others on Bite your Cravings, please leave a rating below!

You can also tag me in your recipes on social media @biteyourcravings so I can see!