I have sadly been waiting to post this recipe since late April! It shouldn’t have been such a big surprise that the wedding took over EVERYTHING in my life – but I can’t say it wasn’t worth it. Aside from getting my masters degree, I’ve never put so much blood, sweat, and tears into something. Working in architecture, I was naturally interested in designing my wedding. Between the coordination of vendors, designing a theme & feel for the night, making sure everything flows for guests, and creating details that pull it all together – I felt it was EXTREMELY similar to designing a building.Each task lined up perfectly with what we do daily…coordinating different building specialists, having a building concept/theme, understanding user experience, and drafting details to make it actually work.

Albeit much more emotion goes into your own wedding, so in that way – it will forever be the most unique project I’ve worked on. I would love to share more about the DIY projects I took on personally, so stay tuned for those! (Hint: one of them is extra large chocolate chip cookies!)

Now, onto the food! I’m really excited to share this recipe with you all finally. I went through a phase of making it weekly back in spring. Around us in DC, we have food chains (similar to Chipotle), but with a Mediterranean twist. This is very much like those places, however the inspiration (or craving if you will) came from 2011. Let me take you back to where this recipe comes from. One of the most amazing places I’ve ever visited, Istanbul, was not just exciting because of the buildings, culture, or Bosphorus. The food (which I guess is entirely apart of their culture) was not like anything I’ve ever experienced.

I’ve grilled shish kabobs every summer and that was pretty much the extent of what I knew of middle eastern food. And – for reasons I still don’t understand or remember, no one over there calls it a “shish kabob”. It’s either chicken shish (not on a skewer) or chicken kabob (on a skewer). They could also possibly be different recipes and different cuts of chicken, but I’m over-simplifying this.Both, however, were served alongside fresh vegetables - like a salad or grilled vegetables.

The other really important part of the meal were the mezzes (small plates) which were like multiple dips that you eat with fresh baked pita bread by hand. I mean fresh as in they make it right next to you. Some dips I remember eating are things like, hummus, muhammara (red pepper & garlic), tzatziki (yogurt sauce), babaghanoush (eggplant), stuffed grape leaves and bell peppers, olive tapenade…Mmm. 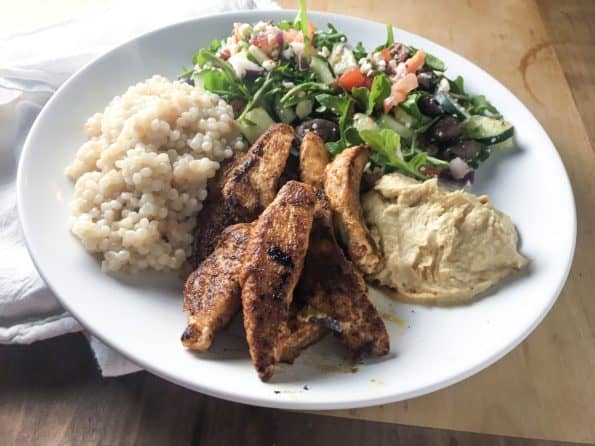 Which brings me to this recipe. There’s something to be said about how healthy Mediterranean food is. I think because the focus of the dish is on the fresh flavors, especially the vegetables. There’s so many combinations we can do, but this time around I did a “mezze” platter of grilled chicken, couscous, hummus, and an arugula salad with tomatoes, cucumber, kalamata olives, feta cheese, and a squeeze of lemon. 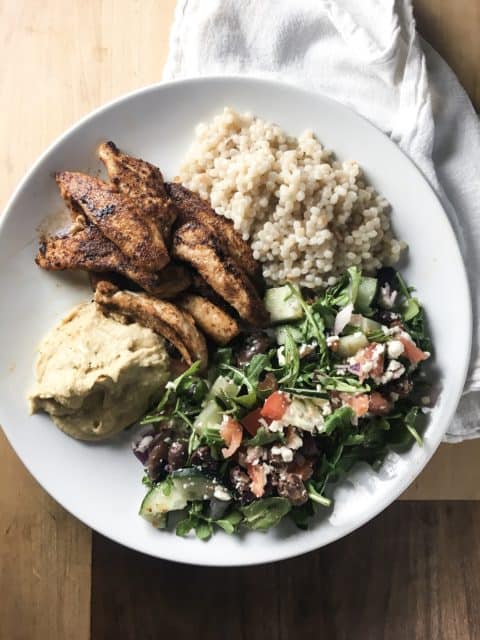