Ah yes, you had to of known this post was coming considering my tomato sauce recipe has been desperately awaiting the other part of it that makes it whole! Traditional Homemade Italian Meatballs, that is.

I know my mozzarella stuffed meatballs were a big hit when I posted them on social media and many of you voted for me to post the recipe, but first I think we gotta keep it nice and classic. Traditional Homemade Italian Meatballs – the stuff my childhood is made of. No, but really. Freshly minced garlic, sharp Parmesan Reggiano, and parsley picked fresh if it’s spring or summer. 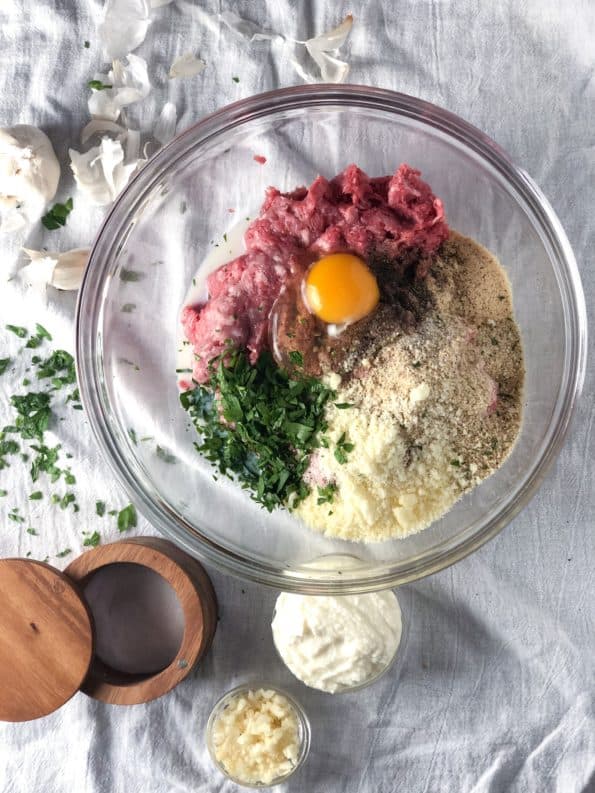 The tradition of assembling those ingredients together, mixing it together by hand, then rolling out each meatball, and frying it before dropping it in the sauce – is a repetition that to me means family. Especially the part where you have to taste test it after a couple hours of cooking in the sauce. (We tell ourselves it’s necessary for the cooking, but I’ve always known it’s just to sneak one in!) 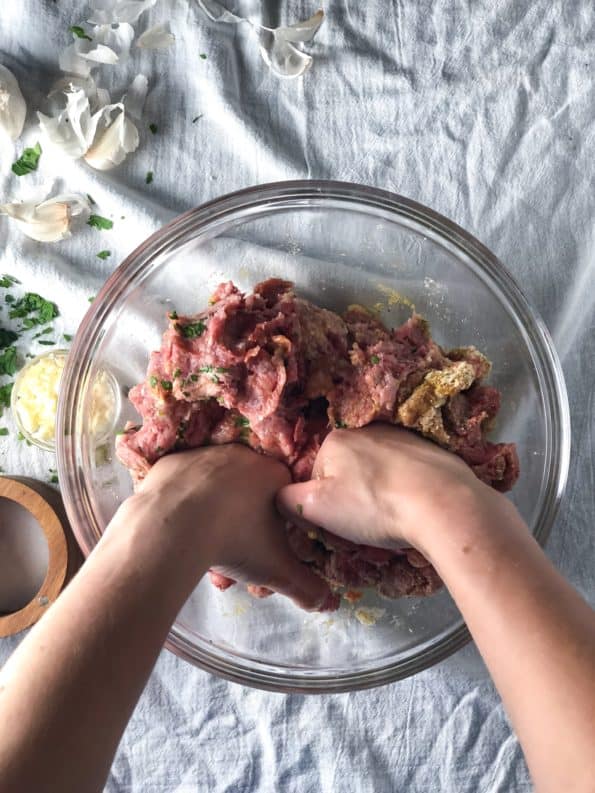 That also reminds me, I’ve been breaking some rules when it comes to this classic Sunday dinner. First broken rule: I’ve been cutting out the pasta, adding a salad on the side, and having it during the week. Reasoning? Meatballs are delicious…and they get a bad rap because they’re associated with a heavy carb meal. However, meatballs are healthy & full of protein (duh). It’s all the stuff we’re adding around it and putting it on top of that’s dramatically increasing the calories of the meal.

Rule number two I’m breaking? I’m baking them instead of frying them. Yep, I said it! Don’t get all offended unless you’ve stood over the hot stove moving around 30 little meatballs for an hour sweating it out! And if you have, well I’m here to tell you there’s a better way. Rant over 🙂

Okay, so what about baking meatballs you ask? Year after year of frying my meatballs in a pan on the stove, I’ve run into the same problem each and every time. Those problems being: 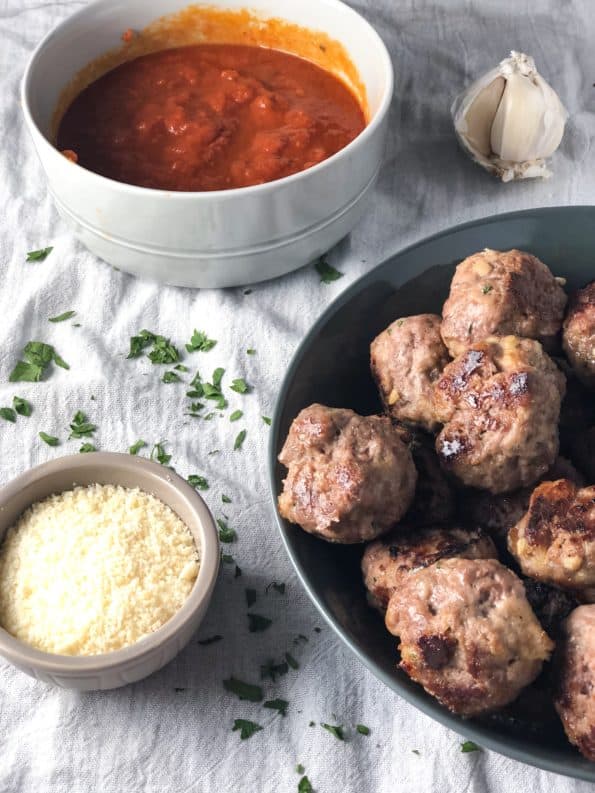 There’s a few things happening here, but my main problem is drying out the meatballs. Traditional Homemade Italian Meatballs commandment #1: Meatballs. Should. Not. Be. CRUMBLY.

Half of this is the ingredients you’re using (which we’ll talk about) and the other half is the cooking method. Regardless of which way you go, always aim to undercook them. In fact, I don’t even think my grandmother cooks them before dropping them in her sauce. And? They are fantastically moist each time. Without that – flavor is not going to save you.

Baking gives me more control over cooking them evenly, not killing the outside, and not draining the fat out of them too much (cause we want that moisture in!). Also, I cooked all 30 little meatballs at the SAME time. Actually, my oven did while I sat on the couch. #winning 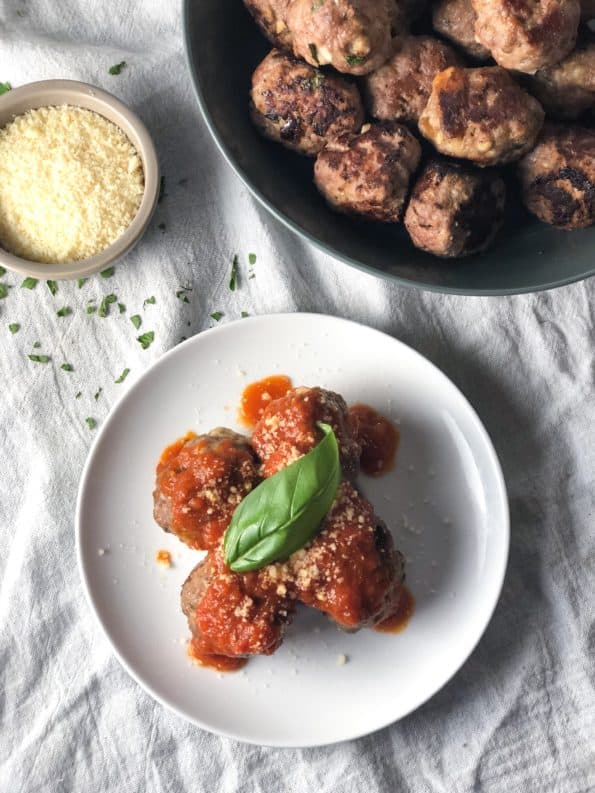 To start, I use a blend of ground beef and pork. Sometimes I’ll incorporate veal too, but they don’t sell those three meats in a trio here like they do in NY! I then season the meat with salt, pepper, garlic powder, parmesan, fresh parsley, and fresh minced garlic cloves.

Mix in 2 tbsp of milk, 1 egg, ¼ cup of Italian breadcrumbs, 1 slice of bread ripped up, and – one thing I do differently, 2 tbsp ricotta. On occasion I’ll also incorporate thinly sliced and chopped prosciutto which is soo good, but I’m skipping that here for now - make sure to check back for that version!

You have to mix everything by hand, so make sure they’re clean & prepare for your hands to get pretty cold! Combine everything until it’s well incorporated and try to not over-mix as this will toughen the meat. The texture should be sticky enough that the ball forms and holds, but not so much that it’s sticking to your hands. If you think the mixture is too dry or sticky, add a small amount of milk. On the other hand, if it’s too wet, add more breadcrumbs.

Before I form the meatballs, I try to let the mixture rest in the refrigerator for an hour. This will let the flavors develop a bit more. Rip off a small portion of the mixture and roll between your palms to form a ball. Keep going until all the meatballs are formed!

Set these on a baking sheet in rows (you might need two trays!) and bake for 20 minutes on 350, flipping them over halfway through.

If you’re cooking these in a sauce afterwards, only cook for about 5-7 minutes on each side, 10-14 minutes in total. 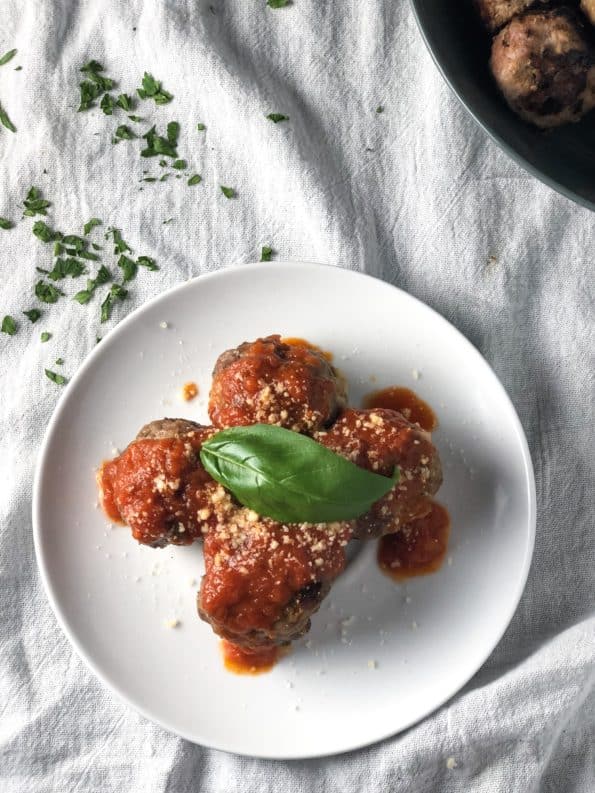 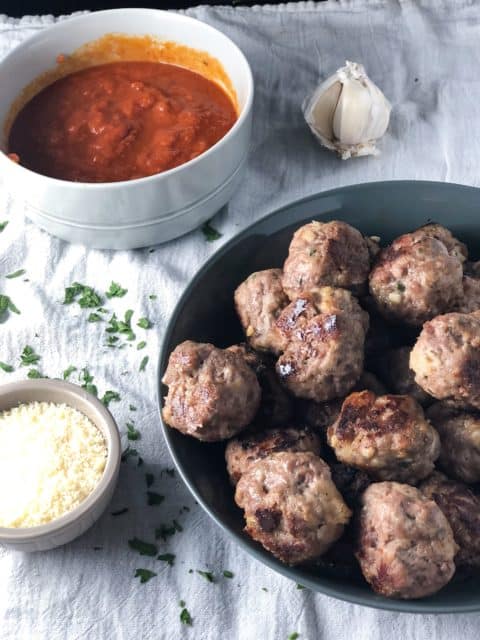 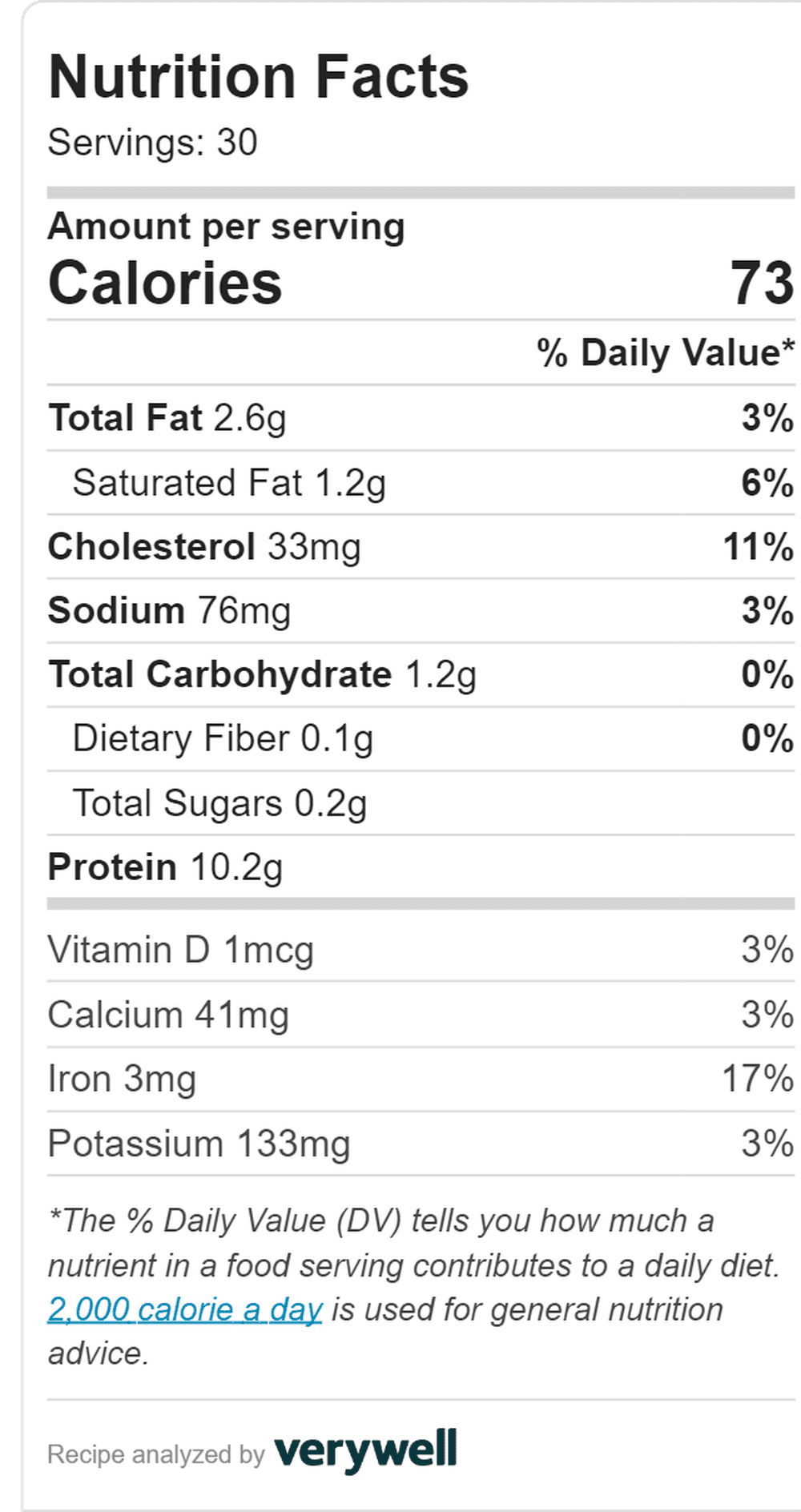