Egg White Wraps are a delicious & quick way to get tons of protein in. They’re also filled with bacon, cheddar cheese, tomatoes, and spinach. 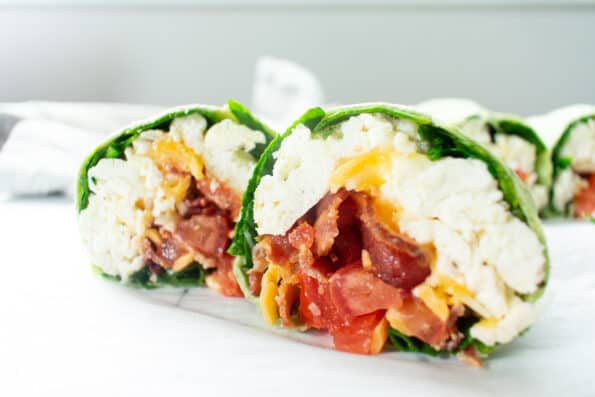 Egg White Wraps are great for a quick meal for a busy morning. They’re one of my favorite make-ahead breakfasts that change things up a bit. They have a delicious filling and tons of protein to keep you full.

They’re kind of like a breakfast burrito which makes them perfect for breakfast on the go too. This recipe is with a filling of baby spinach, tomato, bacon, shredded cheddar, and of course, tons of egg whites to make it a breakfast loaded with protein.

Here are the ingredients you’ll need to make these breakfast wraps:

Egg whites – I used egg whites in this recipe to up the protein content, while keeping the calories low. Using a carton of egg whites vs. separating the egg whites from whole eggs allows you to not waste a bunch of egg yolks. By using ¼ cup of egg whites in each wrap, it probably is equal to about 2-4 egg whites.

Whole wheat tortillas – Using complex carbs in this recipe is another excellent way to make it a filling breakfast in addition to all the protein. I used Mission Tortilla Low Carb Tortillas.

Something to wrap it in – If you’re eating your wrap right away, this isn’t necessary. But if you’re storing it for later or taking it on the go, it will be necessary to wrap the breakfast wrap in something like aluminum foil or parchment paper.

Fillings – Here I’m using baby spinach, tomatoes, bacon, shredded cheddar cheese to keep things light, highly dense, high in protein, and highly filling. You can of course switch these up and keep the method the same. 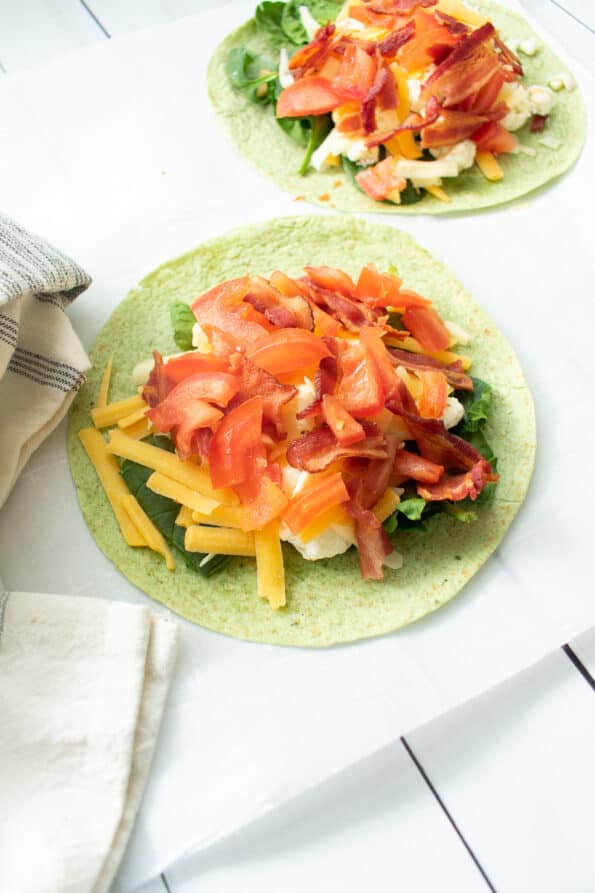 Here is a simple overview of how to make these egg white wraps:

STEP 1: In a medium sized bowl, whisk together the egg whites, half and half, whipped butter, and salt & pepper.

STEP 2: Cook the bacon in the microwave (or on a baking sheet if you prefer).

STEP 3: While the bacon is cooking, heat a small pan on medium heat and spray with cooking spray. Pour in the egg whites and move around constantly with a silicone spatula, cook for only a couple of minutes.

STEP 4: To assemble your wrap: lay out the tortilla on a cutting board or large plate. Layer the spinach, scrambled egg whites, shredded cheese, slices of tomato, and bacon.

STEP 5: To fold the wrap, simply start by folding over two opposite sides to meet somewhere in the middle. Then, you’ll take the flap closest to you and fold that over top.

Very carefully, roll the wrap up until the seam side is down. Note that the filling may fall out of the wrap a bit, but as you’re rolling, you can push it back in and keep going. Cut the wrap into two halves. This may be tricky your first time and might not look too pretty – but after a few times you’ll get much better at it. 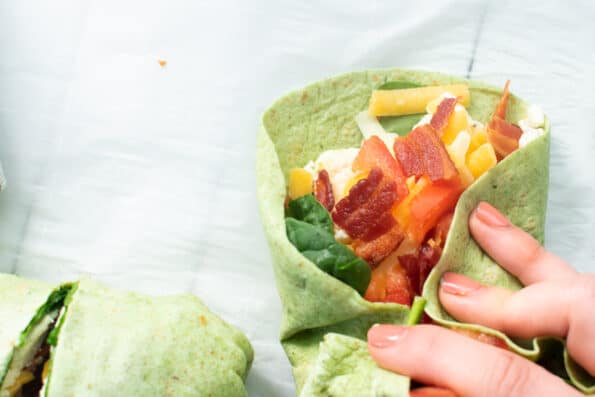 What are some wrap filling variations?

Other ideas to fill your breakfast wraps with:

How do I meal prep or save leftover breakfast wraps?

You don’t quite need airtight containers to save these wraps as much as you do need aluminum foil and freezer bags. If you’ve made a bunch of wraps, you can do a couple things to make sure they stay fresh.

You can wrap them in parchment first and then aluminum or you can just stick with the aluminum foil. After you wrap them all up, store them in a zip lock freezer bag. Making sure they stay fresh is all about keeping the moisture out.

To reheat, simply put them straight into the oven at 375 for about 20 minutes or you can thaw it in the refrigerator overnight and microwave it or heat in the oven/toaster oven.

Other great recipes for busy mornings:

When using the low carb wraps by mission, each wrap contains 302 calories, 9 grams of carbs, 32 grams of protein, and 14 grams of fat. 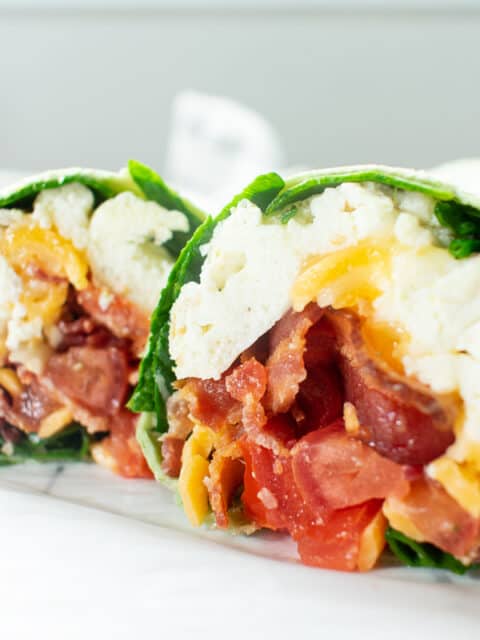 If you make this recipe or any others on Bite your Cravings, please leave a rating below! You can also tag me in your recipes on social media @biteyourcravings so I can see!