Double Fudge Low Calorie Brownies are loaded with three different types of chocolate, use Greek yogurt to replace the butter, stevia to replace the sugar, and still result in a fudgy moist brownie for an everyday sweet tooth.

Double Fudge Low Calorie Brownies are the things you dream of as a chocolate addict on a diet. There’s cakey brownies, fudgy brownies, and right in the middle of them both are chewy brownies. This recipe is for fudgy ooey gooey brownies. Ooey gooey fudgy brownies that are low in calories to be more specific, and there is a difference.

But more importantly, is the flavor and texture of them. These brownies have a few ingredients subbed out to be healthier, but the flavor is intense dark chocolate with a moist fudgy center. If I’m going for a brownie, I’m leaning more towards a dense heavy batter with deep chocolate flavor. If you’re also a chewy or fudgy brownie lover like I am, you know the disappointment when brownies are dry.

Do you see those fudgy centers? 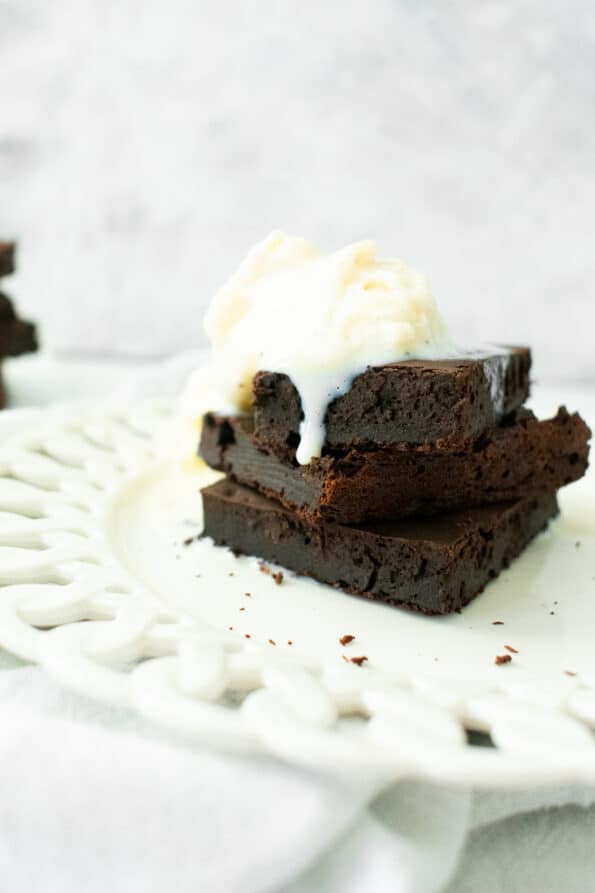 Having a good no-fail brownie recipe up your sleeve is a feat to begin with, but having a healthy brownie recipe to fall back on is also so helpful for the chocolate lover. It’s like having different shades of color that you get to pick and choose based on your mood.

Making brownies healthier is actually not that easy. Especially since I’m trying to recreate chewy fudgy brownies which require a higher fat ratio. Brownies rely on a lot of fats and sugar to make them taste so good. So, lots of butter, sugar, and you bet lots of chocolate. Compare this high amount of moisture to only a little bit of flour. Cakes, for instance, have a much more equal ratio.

Being that brownies are so high in fat, replacing the fat and sugar, is going to make a huge difference in the texture and flavor. There is a happy medium though of how much flavor, texture, and fudginess you’re willing to sacrifice before it gets to be something not even worth eating or something that hardly resembles brownies. 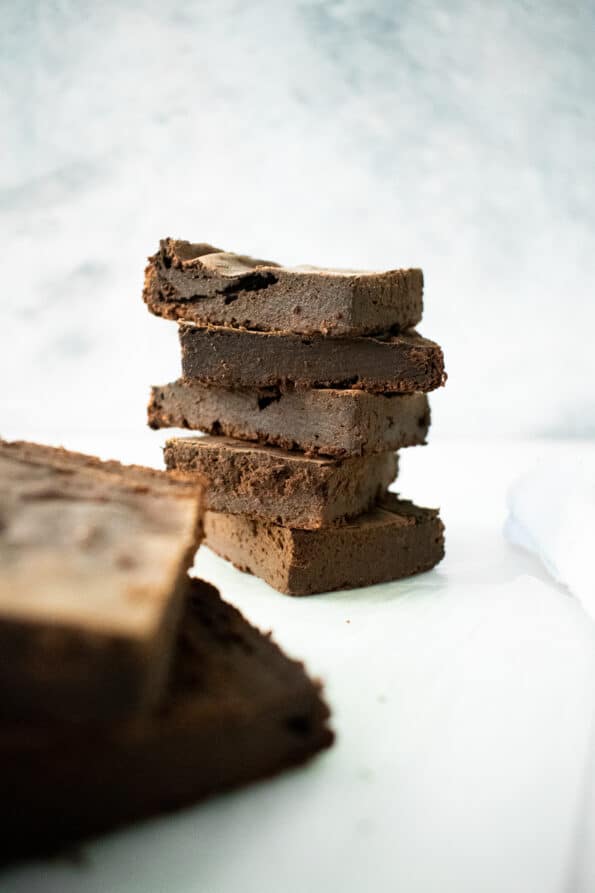 I’ve tested so many brownie recipes to get to this one. There are many substitutes you’ll find for lighter brownies – such as sweet potato, black beans, chickpeas, applesauce, avocado, peanut butter – but I’ve found that none of them yield the results that Greek yogurt does.

Many substitute ingredients made the brownies fall flat, lack moisture and turn out dry, or just lack complexity of flavor. I didn’t want to sacrifice too much just for the sake of them being light or healthy. These are brownies after all.

In addition to them being light, I wanted them to have a bit of protein in them. While I tried whey protein with the flour, they just turned out really sad. We completely threw that batch out! Instead, the protein content in this recipe comes directly from what it needs, moisture! The moisture in this recipe ends up being the dairy (highly concentrated milk and yogurt). 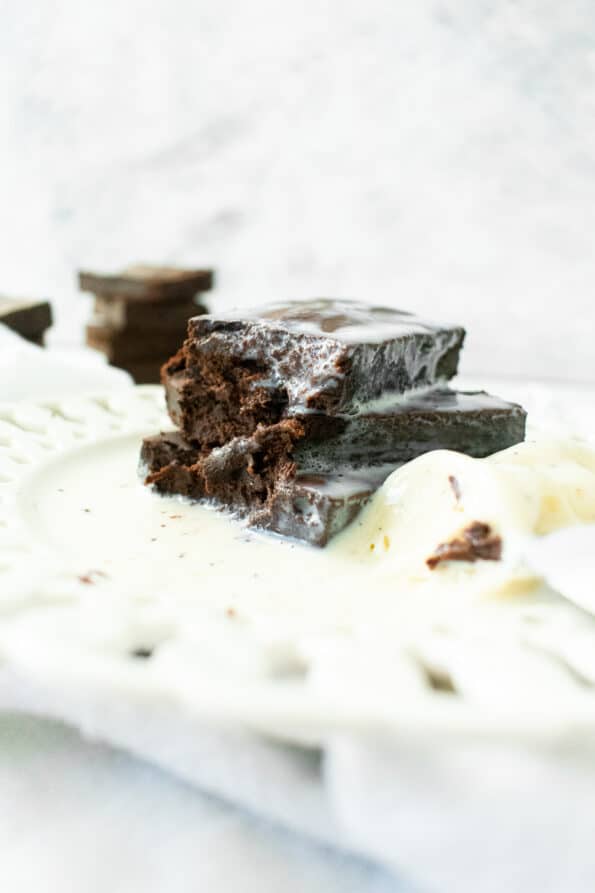 COMPONENTS TO THIS RECIPE

Some tips to keep in mind as you make these Double Fudge Low Calorie Brownies:

High Protein Milk – There are a few milk brands that are ultra-filtered, and because of that process, they’re higher in protein than the average milk. You can of course use whatever milk you want here, but note that I used Fairlife milk to get each brownie to have 4 grams of protein.

Greek yogurt – directly replaces the butter that’s used in brownies. So yes, you could conversely sub out the yogurt for butter too. I used a different kind of Greek yogurt called Icelandic Skyr, which is an even thicker Greek yogurt with higher protein content. Either one will work fine.

Stevia – Much sweeter than sugar so we don’t need as much, calorie-free sweetener, directly replaces white sugar. You would think that because chocolate is sweet, we don’t need sugar – but in fact, cocoa powder is not sweet and is instead extremely bitter.

Store these in an airtight container at room temp. They’ll keep for about 5 days. I highly recommend that you heat up leftovers in the microwave for 15 seconds before eating! 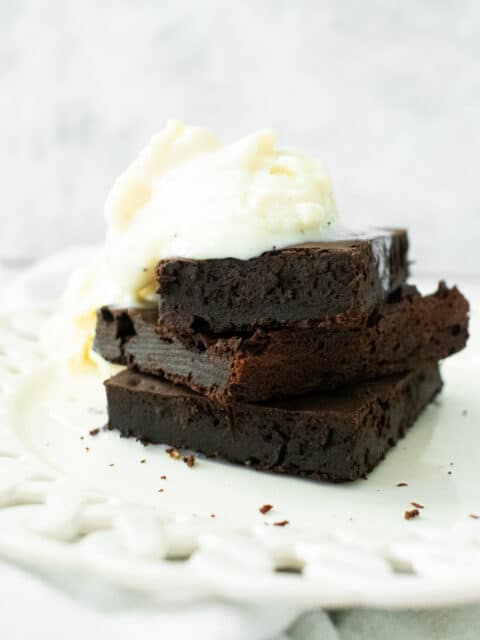 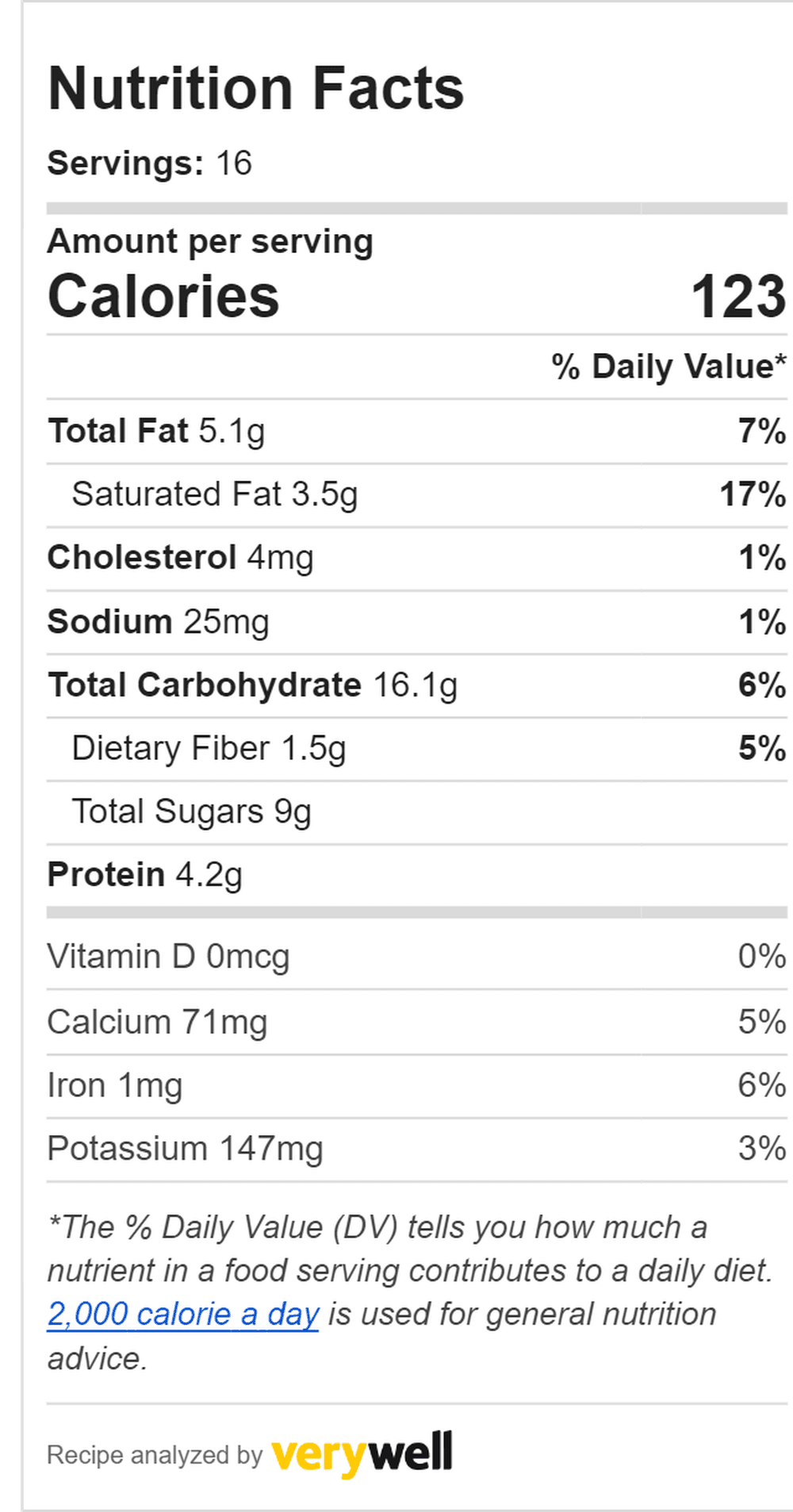